Whether music is your hobby or your house hunting for Snoop Dog, a home with a recording studio is every musician’s dream. This premium property in regional Victoria, featuring an acoustically designed professional recording facility has just come on the market, and can be yours for a modest price tag. Having hosted a string of Australia’s music royalty its not only a place to call home, but a great location that allows the creativity to flow.

It’s one thing to look for an iconic property when buying a home, but it’s another deal to find a space large enough to construct a fully isolated, soundproof recording studio on the same site. That’s exactly what the owner of this Benalla, Victoria craftsmen’s built 1920s Tudor home did upon purchase back in 2002.

Since its completion in 2003 the studio has hosted a string of leading Australian musicians including: Aria award winning Sydney soul diva Jade MacRae – also a regular performer along side Jimmy and Mahalia Barnes – Jade was of the first to record here; You Am I guitarist Davey Lane who has visiting on a number of occasions to bed down guitar parts and complete EP releases, while reportedly enjoying afternoon strolls through the property’s English garden; plus Melbourne pop punk band Body Jar who chose to work with Melbourne record producer Richard Stolz to mix and master new tracks for a ten year anthology release. The resulting recordings have aired on Australian radio and TV, confirming the home studio as being considered at a level exceeding hobbyist level.

The jewel of the home/studio package is a one of a kind,1928-1929 built Stockbroker Tudor home, built by the town’s timber merchants the Carter Family. It incorporates quality hardwoods and other delicate timbers; it’s upmarket in feel with a distinguished style, and offers large living spaces with high ceilings. Another rare feature is the home’s English-inspired, steeply pitched ‘cat’s slide’ roof – making it a bit of a standout. Other period details including formal dinging room complete with clinker brick fireplace, plate rails, wrought iron, bay windows and decorative moulded plaster ceilings add to the charm.

Much of the period detail has been retained while modern design elements like a modern kitchen with Corian solid surface bench top, glass splash backs and soft close draws add value and elegance. The home also features polished floors, hydronic heating system throughout with 15 radiators, air conditioners plus a gas log heater.

Much of the difficult renovation jobs have been tackled including concrete replacement of a whopping 350 foundation stumps making the property sure footed. There’s new electrical wiring with safety switch metre box, energy efficient down lighting, new insulation to ceiling and lower walls, plus a newly conditioned sewer main connection. The recording studio has a separate safety switch power-box, ethernet wiring and NBN to the property is connected. 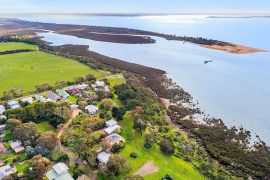 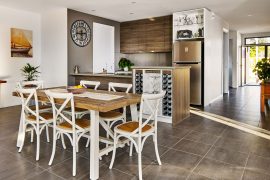