With downsizing, simplification, sea- and tree-changes being the buzzwords of the time, the days of showy trophy homes are clearly over, rather buildings that feature sustainable materials and building techniques are the new order of the day. Melbourne’s Fasham Homes is one such developer that considers both functional design coupled with range of sustainable approaches.

For over 30 years, Fasham has been a byword for homes designed specifically for the space they occupy. Their functional, bright, modern houses are carefully designed not only to suit occupants’ needs, but also to fit in with and complement the surrounding landscape.

Wingspan, a Fasham home in the Yarra Ranges, showcases the effectiveness of this approach. Named for a Frank Lloyd Wright house, the building echoes the design ethos of that revered American modernist. Perfectly positioned on the expansive property, flanked on either side by towering trees, the house is hidden from the road while simultaneously obstructing from sight what lies beyond. The home guards its spectacular views like a secret, to be enjoyed only by those who step through its doors.

Neither the front-facing aspect of the house nor the nature surrounding it announces their virtues loudly. At least not loudly enough to prepare visitors for the view that greets them the moment the front door swings open. Even then, the floor-to-ceiling glass positioned across from the entry merely offers a glimpse of what is on display at the open-plan heart of the home, encompassing kitchen, dining and living area. The entire north-facing side of the spacious room opens up to panoramic vistas of the Toolangi State Forest. Like the rest of the light-flooded home, it is a triumph of simplicity, never competing with the scenery.

Large laminated beams, a Fasham hallmark, are elevated to form a cathedral ceiling that divides the space into virtual rooms. The additional height achieves a perception of greater floor-plan space, while keeping the project on budget. The new materials incorporated, such as the spotted gum floorboards and granite drystone walls and fireplace, were specific requests of the owners. Another – the owners’ childhood dream of a moat and drawbridge – has been simplified elegantly. Here sharp, clean lines feature. A timber decked mini-moat leads the eye forward, crossing a small entrance pond.

Almost as straightforward and streamlined as the style of the house was the design process that brought it forth. The owners had always had Fasham in mind and went straight to the family-owned firm with their brief. After that first two-hour meeting to discuss ideas, the designer drew a plan that, in its essence, became the final blueprint for Wingspan. Today it sits snugly on the property, as though it was always meant to be there. 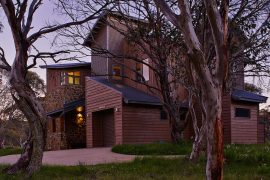